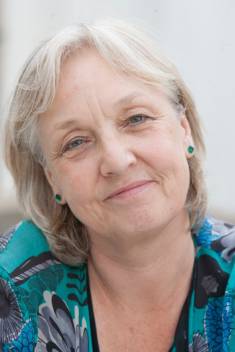 Colour of hair:
Grey now, though I do sometimes get a few expensive streaks put in.
Colour of eyes:
Blue
Birthday:
7th December 1947
Greatest virtue:
Cheerfulness
Greatest vice:
Sloth
Deepest wish:
To be able to sing
Worst habit:
Chewing my nails
Pets:
Huge hairy dog
Children:
Two grown-up daughters, seven grandchildren.
House:
I live in a stone house in County Durham, and work in a lovely sunny office, looking over my garden and the distant hills.

Read some more questions and answers with Anne at Veronika Asks.

How did you become a writer?

The flip answer is that one January there was such a blizzard I couldn't get to the library and so sat down and began a book of my own.  And never stopped writing.  But more sensibly, the best advice I was ever given at school was, 'Find out what you like doing most in all the world, and then find someone who'll pay you to do it'.  So, since books have always been my greatest pleasure, it's not surprising that I've ended up in a career that entails mostly reading and writing.

How do you write your books and how long do they take?

I'm a very slow worker. I write in soft pencil, so it's easy to rub out over and over till I feel it's at least halfway right. I still do that sometimes, but mostly I work on computer, constantly altering what's there with changes and additions and corrections. (It is work.) I hated going over things when I was at school. I'd just sit and let it pour out, and if I'd been asked to redraft it, it would have got staler, and worse. But now I enjoy nit picking till it's absolutely the best I can do. Some books take well over a year. Short books for young readers take just weeks or months.

What do you like most about being a writer?

The silence.  Working alone.  Not having the constant compromises in my work life that most people have.  I write the books for me. (Me at 5, me at 14, me at 55, me at 68.) Then I just hope that there are readers out there who like the same sorts of books I do.

Who are your favourite writers?

When I was very young, Enid Blyton.  Then Anthony Buckeridge and Richmal Crompton (the William books) and Henry Treece. Later, it was P G Wodehouse and Rider Haggard. Now it's George Eliot, Flaubert, Austen, Thackeray, Tolstoy, Rebecca West, Elizabeth Taylor, Dorothy Whipple, Elizabeth Harrower - stop me! - and quite a few of our modern novelists... I also read a good deal of biography, autobiography, psychology and poetry. Oh, and the newspapers.

I want to be a writer. Do you have any advice?

The advice of many of the best writers to children who want to be authors is, 'Don't worry about the writing yet, just read, read, read. Because only if you're a reader will you know whether it's working, and, if not, how to fix it so it does.'

I also think it might be wise not to worry too much if the way you're encouraged to write in school doesn't seem to suit you. One size will never fit all. Clearly, you're going to want to do as well in English lessons as you can. But at home, feel free to let rip and write what you want in the way that you want, not necessarily following any school guidelines.

Do it for pleasure. Write the book you would most like to read. But don't get discouraged if no one wants to publish it. It's tremendously rare for anyone under the age of twenty to get a book published. It proves nothing about how good a writer you may be when you are fully grown and know a bit more about the world.

Can we email you?

You can't email me but you can always write a letter. Mark it clearly for Anne Fine – Author and send it to me through any of my publishers. (You'll find their addresses in small print somewhere in the front pages of a book.) I warn you, some publishers take ages to send these letters on, so don't give up on getting a reply too soon.

I feel quite detached from them, as if they have little to do with me.  What interests me is why people act the way they do:  what's deep inside them, pushing them.  Film can't show that.  It can show brilliantly what happens.  But only the book can explain the complex emotions and (sometimes self-deceiving) thought processes behind those actions.

So, though I've quite enjoyed watching most of them, the films people make of my books are, for me, a bit like the fancy icing shell without the cake inside.

So do you have anything to do with the filming?

Which of your own books is your favourite?

The Stone Menagerie and Round Behind the Ice House.  Don't ask me why. They are almost nobody else's. I think they're both very personal and echo a lot of what I felt in my own childhood.

If I were a child now, I suspect that I'd plump for the three comedies about the Mountfield Family - The More the Merrier, Eating Things on Sticks and Trouble in Toadpool.

Other people between 9 and 13 seem to vote for Crummy Mummy and Me, Flour Babies and Up On Cloud Nine. Younger readers seem to love Nag Club, Jennifer's Diary and, of course, all the Killer Cat stories.

Do you put your family in your books?

Bits of them, sometimes.  But mostly, as Jan Mark says:  'Writers don't write about people they know.  They write what they know about people'.

Where did you get the idea for ...

I spread the six stories out over happy and unhappy families.  I admit the research did shock me.  I hadn't realised how insensitive some parents can be to children's feelings.  I hope the book's a comfort for those in tricky situations, and an eye-opener for everyone else.

The Book of the Banshee

There was a time when we couldn't even bump into friends on the street without swapping horror stories about what our teenagers were doing now.  It struck me it was the stuff of comedy.  And as soon as things calmed down a little, I managed to write it.  (Watch out for the handy hint with alarm clocks.)

One of the most famous adult authors was sent home from school for adding juicy bits to his friend's diary.  Add that to all the letters I get from children saying, 'I can't think of anything to write', and you have a story.

Can I read your books in any other languages?

My books have been translated into fortyfive different languages now. Some languages only have one or two books, but others have almost all of them. Tou'll find some of what's available listed at Books in Translation.