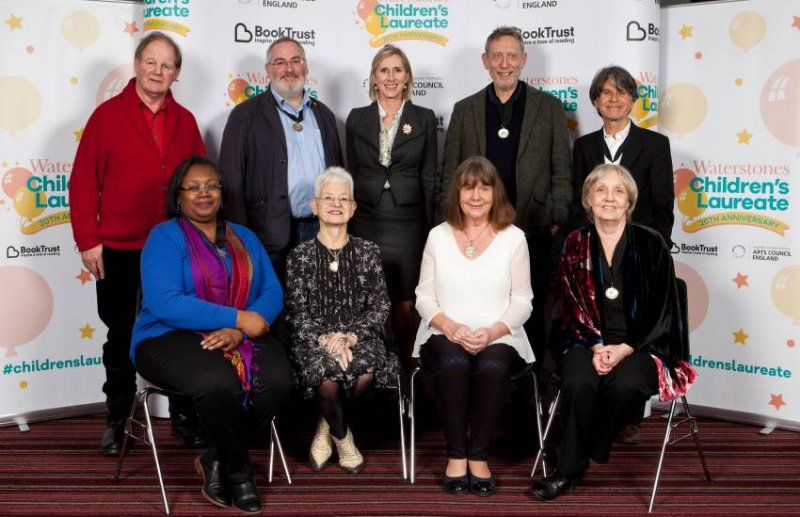 Anne Fine was the second Children's Laureate, and held office between May 2001 and May 2003. In 2019 all the Laureates except the very first, Quentin Blake, gathered to celebrate 20 years of the post. Pictured at the party are Anne, Michael Morpurgo, Jacqueline Wilson, Michael Rosen, Anthony Browne, Julia Donaldson, Malorie Blackman, Chris Riddell and Laren Child.

Read Anne's Letter from a Laureate on the Booktrust website.

Now Anne has welcomed the newest Children's Laureate, Cressida Cowell. Anne says, "I was delighted to hear that Cressida has become the eleventh Laureate. She'll be splendid in the job, keeping a really high profile about things that matter to children and reading and libraries". 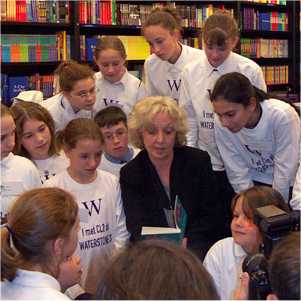 Young readers with their new Laureate

This is what Anne said at the end of her period as Laureate:

I felt very honoured to be offered the Laureateship, but I confess to accepting the role in part to have a little bit more clout to embark on two projects I had been hatching for some time: one public and one more personal. I'm massively indebted to everyone at Random House Children's Books for their support on the three poetry collections I'd been wanting to do for years. I'm glad their extremely positive reception bears out my intuition that they were both timely and sorely needed. Particular thanks here to Philippa Dickinson, Sue Cook and Sophie Nelson.

The Home Library itself is a deep well of debts. First, to our over a hundred artists and cartoonists, who have now provided well over 150 original brand-new, originally designed, free, downloadable modern bookplates both in colour and in black and white. What generosity! I'd like to thank all the artists again. We have thousands of hits worldwide daily now. If you haven't looked at the site recently, please do.

My warmest thanks and appreciation here of course go to our web designer, whose brilliance shines through our zippy site, and who has given 400 per cent for two solid years. The site would not have been the same without him and I cannot sing his praises highly enough.

Everyone who has spoken to me in the last two years knows how much the Laureate secretary, Lois Beeson, did for The Home Library, how committed and professional she was, and how much I admired her patience, her tact, her determination and, especially towards the end, her sheer grace. Her untimely death this year was such a sadness. So many have lost a good friend in Lois. My own debt to her over the past two years has been incalculable.

There have been several delightful spin-offs from our work this year, including a brand new rollicking system of interleaving popular picture books with transparent brailled text pages for sharing with seriously visually-impaired and blind children, and in families with visually impaired and blind family members. Having been set up, this scheme will now continue to run on apace without us, drawing blind and seriously visually-impaired children into the ambit of the Home Library. I'm immensely grateful to everyone who shared their experience in this field, especially to Marion Ripley of ClearVision who had the skills necessary to organise everything (again, with unstinting help from Lois), and to Jackie Wilson, Philip Pullman, Terry Pratchett and J.K. Rowling who had the generosity to put their hands in their pockets promptly when asked, to help me fund it. Thanks, too, to all the publishers who continue to provide books at cost as this scheme too, rolls along into the future, and to all the long-term prisoners I met at Gartree and Long Lartin who continue to braille any requested picture book in their prison workshops.

Another sincere thank you to the architect Angus Forsyth, who designed and made (at cost, the saint!) the first Tactile Wall - a construction of fascinating tactile panels - for the blind and seriously visually-impaired children of Linden Lodge School in London. I truly hope it will turn out to be the first of many, even if I can't impose on Angus again for each and every one of them.

I want to give the warmest of thanks to the DCMS, who have been so very generous and supportive - especially Annabel Jones and Mark Mason, both of whom could instantly see the value of the Home Library scheme, in particular for those of our children who live in less privileged areas.

Thanks, too, to the print media, who have done me and the scheme proud throughout. I remain deeply disturbed and depressed by the low levels of commitment of other media, especially television, to the vitally important matter of children's reading. Television's persistent emphasis on 'celebrity', and their pathological fear of 'talking heads' for the young, seem to me seriously to impair the quality of content of those comparatively few moments that they do actually choose to devote to books. Television producers, of all people, most need reminding that the book is infinitely more important (and, one would hope, more interesting) than the author, and that, given the chance, children are interested in what they read, not simply in the person who wrote it.

I'm thanking everyone I can here, but clearly I can't fit in everyone who has been a real help and a support to me through the last two years. But you all know who you are. And thank you all so very much.

The role of Children's Laureate is awarded once every two years to an eminent writer or illustrator of children's books, to celebrate outstanding achievement in their field. The appointment of a Children's Laureate acknowledges the importance of exceptional children's authors in creating the readers of tomorrow. The Laureateship was the original idea of the award-winning children's novelist Michael Morpurgo, himself Anne's successor as Laureate. Former Poet Laureate, Ted Hughes, was the patron and close supporter of the award until his death in October 1998.

More information about the Children's Laureate is available on the Booktrust web site www.childrenslaureate.org.uk. There is also a web site for the My Home Library project, and here, on this web site, you can read more from Anne about it.