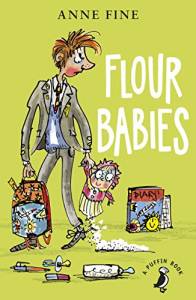 When the annual school science fair comes around, Mr Cartright's class don't get to work on the Soap Factory, the Maggot Farm or the Exploding Custard Tins. To their intense disgust they get the Flour Babies — sweet little six-pound bags of flour that must be cared for at all times.

"Funny and moving, Flour Babies is an uplifting, self-raising story"

Flour Babies is a book for older children. It was first published in 1992.