ROUND BEHIND THE ICE-HOUSE 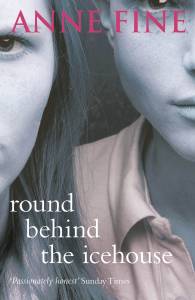 I'm not the only one with secrets.

Tom wants to get back into the past when he and his twin sister, Cass, were still so close. What are the secrets she is keeping from him?

Tom has to face the fact that as he and Cass grow up they have to grow apart. He may be her brother, but he doesn't own her and he never can.

What Anne Fine says about Round Behind the Ice-House:

Round Behind the Ice-House is my favourite, although no one else's, probably because it's the one that's so like me.

Round Behind the Ice-House, is a book for older children. It was first published in 1981, and the new Corgi edition was published in 2006. Click the logo to buy this book from