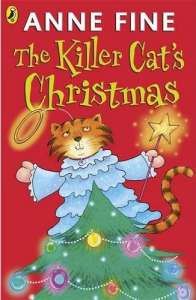 So go on, ask me: "Dear, dear Tuffy. Why was your Christmas so horrible?"

Well. I couldn't climb the tree. I couldn't touch the dangly decorations. And Ellie made me part of her sing-along Christmas performance.

But I showed them. I was Tuffy the Acting Cat, superstar.

How was I supposed to know things would get so . . . messy?

Tuffy the Killer Cat has shared his private thoughts with his delighted readers in four hilarious installments. But have you ever wondered what he thinks about Christmas? Anne Fine is ready to tell us:

You'll all know I have very little time for the Killer Cat's endless complaints. I think he's spoiled and rude, and very selfish. But I have a certain sneaking sympathy for his attitude towards Christmas.

And, if he's really unlucky, horrible cold white snow all over the garden.

But this year's Christmas holiday goes worse than most. To find out why, you'll have to read the book. (And if you have a sneaking sympathy with Christmas-haters, go out today and find a copy of The More the Merrier, too - for 8-12 year olds (and women of all ages).

Another hilarious outing for the "Killer Cat" - read about all of Tuffy's exploits here.

The Killer Cat's Christmas by Anne Fine is a book for younger children. It was first published by Puffin Books on 5th November 2009.

Buy The Killer Cat's Christmas from

or order it from your local bookshop or library (it will help them if you tell them the ISBN):