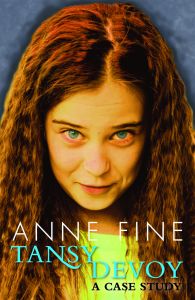 There can't be a parent in the land who couldn't cheerfully reel off a litany of the various misdeeds committed by their offspring. But what if those transgressions aren't so small? What if they sometimes appear to shade into real wickedness?

Marcia is an experienced child psychologist. But she has never come across a child like Tansy Devoy. The parental response to her probing isn't helpful. And in the desperate attempt to understand the roots of Tansy's behaviour, Marcia is forced to begin to think about one or two disturbing aspects of her own childhood.

So, forced by the system to make her professional recommendation for Tansy's future, Marcia is deeply rattled. By now she knows exactly how bad things could get if she calls this one wrong.

Families have always been my stomping ground...

... but I don't tend to write much about those on the extremes. I suppose I usually find quite enough interest and tension in the day to day life of essentially well-functioning homes. I've tackled families in real crisis only twice in books for older children: in The Tulip Touch, and in Blood Family. But even then, the off-the-wall behaviour of both protagonists was quite understandable, given the pressures of their childhoods.

This is a different sort of story entirely, and there is a reason why it is a novel for adults, not young people. I think it's realistic. But I have put together what has become, in Tansy's family, a truly toxic mix of a child hair-triggered to get attention any way she can, and two parents determined to keep their heads well buried in the sand. In this book, then, I am more interested in parenting than in childhood.

I know where I stand on the matter. Read it, and see what you think.

All about Tansy Devoy - A Case Study. 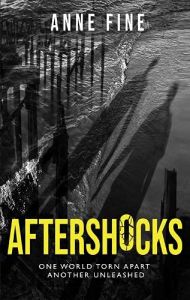 Louie never expected to visit the Endlands. that most isolated outpost of the Federation. And he certainly never imagined that, once there, someone would find a job for him to do. A most peculiar job...

Aftershocks! is a new novel from Anne Fine; published on 10th February. The Times made it their Children's Book of the Week, and called it "a weird and wonderful triumph". This is how Anne introduces it:

"A massive earthquake followed by a devastating tsunami leaves Louie and his engineer father caught up in the other-worldly manner in which the silent and strange Endlanders deal with the hinterlands of memory and loss. This raises ghosts for Louie, who has recently lost his own brother. And for his father, whose way of dealing with his precious son's death was so very different from that of Louie's mum.

"It's not the easiest of topics to handle, and I'd been avoiding it for years. Almost all authors get requests and suggestions along the lines of, 'I so wish you'd write about this difficult issue. It happens to many more people than you'd care to think.' And this is one of them..."

Read the rest of this - or read all about Aftershocks.

Jamie and Angus, Forever and Ever

With the reissue of Jamie and Angus Forever, all three Jamie and Angus books are now available in a fresh new edition. Anne Fine introduces two old friends, a little boy and his Highland bull: 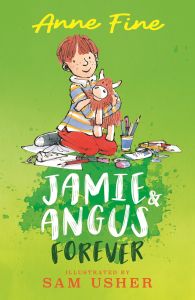 When I presented my editor at Walker Books with the first Jamie and Angus stories, her perhaps somewhat unguarded response was, 'Oh, Anne! I didn't know that you could write nice books!'

But I had never before written bedtime stories for three to six year olds, and no one wants to leave a child alone at night with disturbing, aggressive, or even too exciting, mental images. So these are short, domestic tales that cover various aspects of Jamie's daily life, always along with his favourite, and ever amenable, soft toy, Angus. (Early childhood being pretty well universal, I was proud when the first set of these stories won the prestigious Boston Globe/Horn Book Awards.)

In this, the third and last of the series, among other things Jamie wins an Eating Slowly race, finds a new and interesting Way to Cry, and, with the help of Granny, makes some Feeling-Better Spells.

The fresh illustrations by Sam Usher perfectly match the gentleness and humour of the text. My own grandchildren are now, sadly, long past this phase of life. But I hope that parents and grandparents everywhere will continue to enjoy reading the trilogy as much as I loved writing it.

Scared of a Rainbow? 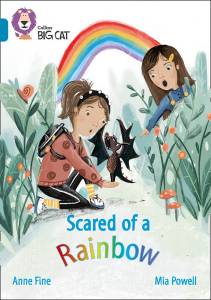 And here's an example of Anne's creative process!

"You never know," she says, "where your next idea for a book for young people will come from....

"I'd been reading the massively pruned Penguin edition of The Ultimate Ambition in the Arts of Erudition, by Shihab al-Din al-Nuwayri, which was a 9000 page, 33 volume compendium of all the knowledge in the universe, which he wrote in the Mamluk empire in the 14th century.

"But it turned out to be a joy, full of deliciously mad beliefs. Raindrops start out the size of camels, but get filtered smaller as they fall through the clouds. If a hare so much as glimpses the sea, it will die. The chameleon panics each night when it can't see the sun.

"I invented the bad-tempered bogo (a bit like half an angry umbrella). And the creature has more mad beliefs than Ellie and Tasha can believe, a good number about the serious danger of rainbows.

I have to say it was a good deal more fun to write than the original must have been. Not to mention more than 8950 pages shorter.

More aboutScared of a Rainbow here.