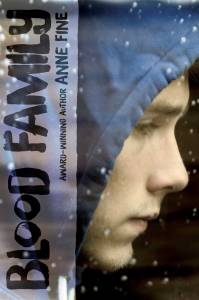 Does the past ever leave you?

Locked away by his mother's monster of a boyfriend, Edward is seven years old before a neighbour spots his pale face peering through a crack in the blocked window. Rescue soon comes, but lasting damage has been done.

Years on, it's clear to Edward's new adoptive family that something in his past haunts him still. Then Edward catches sight of a photograph that shocks him to the core.

Could there be yet another monster in his life who has been waiting to break out all along?

"Fine's narrative turns an unflinching lens on issues of free will, family, and individuality. Tenderly crafted and thoroughly thought-provoking, give this one to teens hungry for discussion - and a dose of gritty realism."

"A brutal and hopeful book that deals with addiction, choices, influences, and inherited traits that should find a home in most YA collections."

A starred review in Kirkus Reviews called it "A powerhouse of a story about a boy who survives."

More reviews - and what Anne says about how she came to write Blood Family. 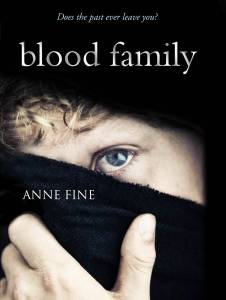 Blood Family was published by Doubleday Children's books on 4th July 2013; you can order it from

"Reading Anne Fine's work is always a challenge as well as a delight. She's like a difficult relative who appears at family events and tells everyone a few home truths, yet gets away with it because she has such a wickedly witty turn of phrase...

"It's a song about "learning to live with pain" that is deeply serious, but at the same time has a deliciously light touch - a trick only the best artists with genuine insight into the human condition can pull off. Anne Fine is definitely among their company."

"...the shifts in narration keep the story moving forward and ably highlight the frustrations, care, and mistakes of the many people who try to help trauma victims."

"This intense, truthful and perfectly crafted story from the double Carnegie medal-winning author, like her novel The Devil Walks, examines the issue of nature versus nurture. Both books feature young boys shut away from the world with psychologically disturbed mothers, but whereas one was a wonderful slice of gothic literature, this is a compelling and all too recognisable modern drama.

"Can a child ever recover from such a dreadful abusive start? Do the petty bureaucracies that afflict social work, the police force and education system ever work in a child's favour? What is so powerful and moving, however, is just how hard everyone is trying to do the right thing. This author does not allow herself any easy targets or any easy answers precisely because life is not like that and she captures every nuance and shade of meaning in every situation so well.

"Eddie is a character who will live with you for a long time and you utterly believe in him on every step of his journey, including when it all appears to go permanently downward. The multiple narrators each offer their insights and perspectives and masterfully allow Eddie's own voice the space for expression rather than be hampered by exposition.

"The subject matter may make people wary of encouraging young people to read this book, but there is nothing here that they do not unfortunately see reflected every day in the media and the message that nothing in life is easy, but that redemption is possible, is both apt and important. Anne Fine writes not only with beautiful economy, but truthfully and with great insight into and respect for young people, who are each trying to make sense of themselves and of the society we live in and that is something we all should value and promote."

"The darker material is offset brilliantly with witty observations and the entire book has a powerfully honest tone that makes this an evocative, emotional and beautifully imagined book."

We Love This Book

"Blood Family covers the age-old debate between nature and nurture. It asks if our past can ever be banished. It's about guilt, grief, and anger. But it's also about redemption. It's beautifully, carefully, written. And it feels very, very truthful. I believed every single word - from the degradation of Edward's early life, through the biddable but disassociated child in the early aftermath and the often crass actions of social services, right to the inevitable breakdown in Edward's adolescence. It's the best story in the kitchen sink style I've read in a long time. And I think it'll win prizes."

Anne talks about the background to Blood Family

Blood Family is almost a companion piece to The Devil Walks. I'd become interested in the difference between the sheer chance of where an unprotected child could end up a hundred years ago - for better or worse - and what happens now. The scrupulousness of modern procedures must prevent horrors in fostering and adoption; but guidelines can become so strict that sometimes the 'real' best solution for a child is no longer seen as acceptable.

I read around the subject a good deal. A child's 'journey through placement' is an extraordinarily complicated business involving so many professionals - all, it seems to me, of good will, but often hampered by procedures of which even they become sceptical.

That's why the story is told in so many voices. Everyone involved with Eddie gets their say. I learned so much about 'looked-after children' while I was writing the book. I don't see how anyone could come to the end of it without a richer appreciation of how much many of these children have to bear, how many people make huge efforts to help them through, and how at the end, to everyone's relief and sheer delight, they can still triumph.

Anne also talked about Blood Family to the Reading Zone, who made it their Teen Book of the Month.