A Shame to Miss 3 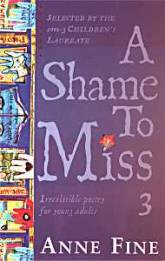 What I've done here is to pick the poems young people seem to like best. Show the collection to adults and half will be stabbing the odd page muttering, 'This one's a bit unsuitable, isn't it?' and the other half will be reeling round the room clutching their heads, wailing, 'What, only one Keats sonnet? Only one?'

Ignore them. See what you think. Remember that some of the more old-fashioned poems are easier to enjoy if you decode them first. Take Wordsworth's On Westminster Bridge:


Earth has not anything to show more fair:
Dull would he be of soul who could pass by
A sight so touching in its majesty:
This city now...

Translate that into, say,


Champion view!
You'd have to be a stone to walk past that.
Breaks your heart, dunnit,
London...

and you'll begin to see why Wordsworth has the edge on the average hungover dawn homegoer leaning over a parapet.

You read a poem. Some images and phrases stick, and from that moment you can see flashes of the world through that poet's eyes. Practically every adult you know says every November, "It's getting dark so early." You don't think twice about it. Then you read E.J.Scovell —

— and the poet's way of putting it haunts you. You see what's happening in a richer way.

In her autobiography To the Island, Janet Frame describes the magical effect of her private reading at this age as:

...the other world's arrival in my world - the literature streaming through it like an army of beautiful ribbons through the branches of a green growing tree, touching the leaves with unexpected light.

One thing to bear in mind is that you often don't fully 'get' a poem until a long time after you first come across it. You may study or even learn it by heart - usually because someone makes you. But only when you fall in - or out - of love, lose someone, travel, can't sleep for a week, stand in a snowstorm, get bitten by a dog or whatever, do the chosen words spring to mind. Now you can truly understand how brilliantly the experience was captured.

So try to think of some poems having, like flu medicines, a kind of timed release. Take even those on trust. I promise you, you won't be sorry later.

Selected personally by Anne Fine, this is a super collection of poetry that shouldn't be missed by any teen. Kingsley Amis, John Betjeman, Robet Browning, Leonard Clark, Adele Geras, Seamus Heaney, A E Housman, Philip Larkin, Pablo Neruda, Brian Patten and Derek Walcott are amongst the poets featured and there are over 100 poems in total.

Order A Shame to Miss 3 from Amazon.


More A Shame to Miss poems for younger and middle readers.