A Shame to Miss 2 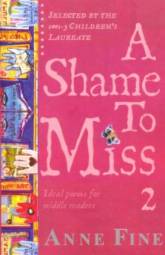 It was a whole lot easier for people my age to come to know, and even enjoy, whole reams of poetry. For one thing, our grandparents were forever spouting great chunks of their own favourites as we sat on their knees. (I'm not kidding.) They'd been forced to learn them at school or in Sunday school, either as homework or as punishments. And they were often still word perfect half a century later. One of my grandmother's party tricks was to make my poor mother weep buckets - even at forty years old - by reeling off some dismal Victorian tear-jerker about a family so poor that they had to give away one of their children, and were trying to decide which one to choose. (I've spared you that one.)

I've chosen poems people your age find it easy to like. The more you say a poem aloud, the easier it is to 'unpick it' to see what it means, especially if you pay attention to the punctuation. And sometimes I've put something by the poem, so you'll understand what it's about a little more quickly.

Go on. You might enjoy them.
Millions do. They can't all be pretending.

Anne Fine is a life-long lover of poetry, and she has personally selected the poems in A Shame to Miss2 to appeal to young readers. The collection contains a wonderful mixture of the familiar and classic (W H Auden, A E Housman, Christina Rossetti, Wordsworth and other poets) with poems from the late 20th century like Stevie Smith's Not Waving but Drowning or Ted Hughes' Full Moon and Little Frieda. Poets from Afro-Caribbean backgrounds like John Agard and Grace Nichols are featured, alongside several other poets from non-European cultures.

Order A Shame to Miss 2 from Amazon.


More A Shame to Miss poems for younger and older readers.