THE KILLER CAT RUNS AWAY 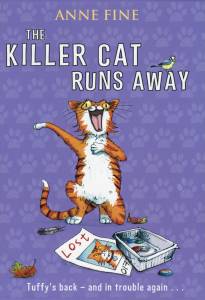 His owners just don't appreciate him.

So what if he broke the new TV? Got fur on all Dad's clean clothes? Ate Tinkerbell the kitten's special kitten-food?

But they're making such a fuss!

So Tuffy decides to make a break for it. He bids farewell to the gang - Snowball, Tiger and Bella - and runs away.

But starting a new life isn't easy, and soon Tuffy starts to wonder if he's made a terrible mistake ...

"Tuffy the Killer Cat is back in a terrifically sharp-clawed story... distinctly feline and very funny."

The Killer Cat Runs Away is a book for younger children. It was published in hardback by Doubleday Childrens on 6th Jun 2013.

Buy The Killer Cat Runs Away from