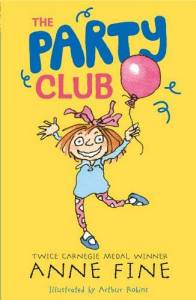 So she is disappointed when some of her classmates announce that they have outgrown parties and would rather go to the cinema or bowling. Rosie decides to set up the Party Club and remind everyone of how much fun they'll be missing out on.

But it's harder than she thought, particularly when even her parents don't seem to like birthday parties much.

From the author of Bill's New Frock comes a humorous and sensitive story about growing up and feeling like the odd one out.

The Party Club is a book for everyone who loves Nag Club and The Only Child Club!

Order The Party Club from