I: How the Horror Began

Everyone else thinks so too.

"Would someone please put that pest-ridden dog out?"

"Knock it off Anthony!"

Especially for someone like me. I'm not fussy, exactly. (Personally, I'd call it 'fastidious', though I know one or two have rather harshly used the word 'prissy'.) But I'm not one of those mucky 'I'm-a-mutt-and-I'll-scratch-if I-like' pups. I suppose I just think the world's a nicer place for all of us if everyone tries to keep their smells and messes and nasty little personal habits quietly to themselves.

Call me a fuss-budget if you will, but I just like to help to keep things nice.

Then you think, if you just have a little go at that itsy-bitsy patch there ...

And then you think, now you've started anyway, you might as well scratch sideways on to this bit here ...

And before you know where you are, every single bit of you is aflame.

I'm not exaggerating. I mean, AFLAME.

And no one sympathizes. They just think you're being annoying.

"Anthony, if you don't stop that dreadful scratching, I'll put you outside again, even though it's raining." 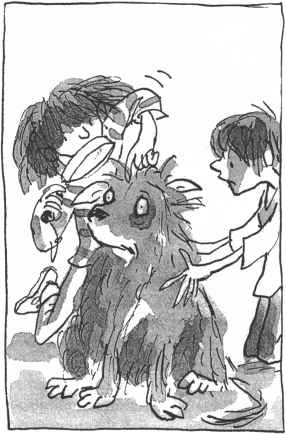 Talk about a dog's life. If it hadn't been for Moira next door, I might have scratched myself to pieces.

"What's wrong with your dog?"

As if that Joshua would take his eyes off his game for a moment to glance at his own pet. "Nothing."

"Yes, there is, Joshua. He's dropping weird flakes all over your carpet."

I'm not even going to tell you about the next bit. It's just too horrible. Suffice it to say that it involved an argument about whether or not that stuff all over the rug was actually bits of dead dog skin. And then we had to wait while Moira went home to borrow her granny's magnifier reading glass. And then I had to put up with the two of them endlessly prodding and patting me.

"Ugh! Yuk! That is some sick stuff floating off his back!"

"Gruesome! You ought to tell your mum."

Nice, eh? I expect he's forgotten some of his own rather disgusting habits. And as for Moira, well, I've seen her often enough, sitting with her back to the house, doing things to her nose she wouldn't do in front of anyone except me, and possibly Belinda, her pet hamster.

At least the two of them did some thing useful when my Humiliation Hour was up. They told Her Ladyship.

"Mu-um! There's something wrong with Anthony."

"Yes, Mrs Tanner. Come and look at this. It's horrible!"

So Mrs Neglectful finally ambles to the doorway, carelessly dropping cheese from the grater she's holding. (One small bright spot in the day for me.) 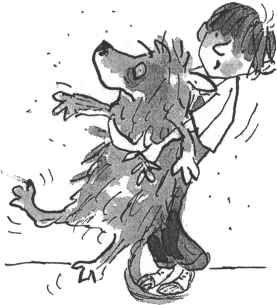 "What sort of wrong?"

"His skin's all coming off:"

(Well, thank you, Joshua. And don't expect any company or sympathy next time you get chicken-pox.)

"Yes, Mrs Tanner!" chimes in Moira. "He's all poxy red underneath. And bits of him have gone gooey."

(Fine, Moira. Just don't sit waiting for me to waste any more of my time fetching sticks to amuse you, next time you're stuck at home with the measles.)

The Kitchen Queen strolls over. I'm hoping she at least has the sense to put the grater down before she touches me. And wash her hands thoroughly after. After all, as I said, I wouldn't call myself fussy. But I do like the leftovers that get scraped into my bowl to be reasonably wholesome.

Touching me, nothing! Mrs 'What?-In-My-House?' draws back. "Ugh! That is horrible. That is repellent."

Well, thank you very much. Is there anyone out there, reading this, who's been wanting a crowd of insensitive people?

Because I've got a load here.