THE OTHER DARKER NED 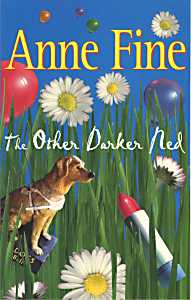 Mope, mope, mope. That's all she ever seems to do nowadays. Well, there's more to living than just sitting around letting life slide past you.

Ione Muffet isn't going to sit around any more. Her father, professor Muffet, says she does nothing all day, but Ione decides to make the most of her last days of the holiday. With the help of her friend Ned Hump, she tries to put her plans into action, only to find chaos and confusion begin to spread...


Ione, Ned and the other characters first appeared in The Summer House Loon, which has now been reissued in a single volume with The Other Darker Ned as On the Summerhouse Steps. This combined and revised edition was published on 1st June 2006. Anne Fine has written about the changes she has made to update the current edition in two articles, one aimed at child readers and one intended for parents and teachers.

"Characters burst noisily and eccentrically out of the pages."

The Other Darker Ned is a book for older children. It was first published in 1979.