ON THE SUMMERHOUSE STEPS 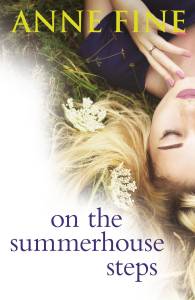 A girl with Notions

And Ione, alone in the summerhouse, pondering the Meaning of Life.

Ione Muffett is alone in the summerhouse when she meets Ned Hump - a wacky student who is in love with her professor father's secretary, Caroline. In a zany and uninhibited 24 hours, Ione helps bring the two together, culminating in a wonderfully anarchic picnic. And as Ned helps Ione with her plan to help famine victims by running a Bring and Buy sale, Ione's confidence in herself slowly begins to grow.

On the Summerhouse Steps brings together Anne Fine's first two books for children, The Summer House Loon and its sequel, The Other, Darker Ned. Anne has revised the two books thoroughly, to make sure they're up to date enough for today's readers but still have the quality that made them so very successful when they were published all those years ago. The two have been combined into one fat book with a freshly-written link to pull them together.

The Summer House Loon was a runner-up in the Kestrel/Guardian Competition, 1975.

"Perceptive and very funny ... a series of extraordinary and hilarious events."

"Deep understanding, wisdom and compassion... tosses the reader between laughter and tears with expert dexterity."

"Characters burst noisily and eccentrically out of the pages."

You can still read about the original editions at The Summer House Loon and The Other Darker Ned.

These two books for older children were first published in 1978 and 1979. This combined and revised edition was published on 1st June 2006. Anne Fine has written about the changes she has made to update the current edition in two articles, one aimed at child readers and one intended for parents and teachers.

A Kindle edition is also available.