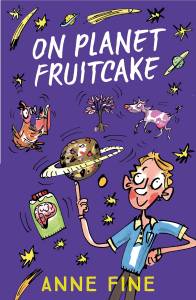 Philip has an incredible imagination.

When he lets it run riot in school one day it really gets his classmates thinking. Purple cows ...brains in pots ...a clever and beautiful chicken...

What will they think of next?

"Fine has a rare genius for building a funny, enriching and moving story around the nuts and bolts of school life."

Longlisted for the UKLA Book Award 2015.

Anne talks about On Planet Fruitcake

I love writing books for juniors - whom I take to be anybody between seven and eleven. They're bright enough to catch on to any ideas or jokes I want to get over. (For example, the issues about gender in Bill's New Frock, bullying in The Angel of Nitshill Road, and compassion in farming in The Chicken Gave it to Me.)

In this new comedy, On Planet Fruitcake, I'm trying to introduce the notion of critical thinking. Children this age rarely have the faintest idea what a philosopher is, or does. I don't have that sort of mind myself - quite the opposite. But I was married to a philosopher for twenty years, and I certainly know the ways in which they approach things.

I've used a lot of the old tricksy questions in the book because, apart from being instantly appealing to children ("How do I know that this is not a dream?" "Is it always wrong to lie?" "Would I be me if you scooped out my brain and put it in someone else's body?"), they do illuminate some of the great ideas of western philosophy. They certainly are an insight into the ways in which philosophers and moralists try to think.

But this is a very normal classroom in a very normal primary school. So, as you can imagine, tempers run high at times and chaos ensues.

With her very funny and apt illustrations, Kate Aldous has, as always, done a wonderful job to turn what is already an easy read into even more of a pleasure for this age group.

On Planet Fruitcake is a book by Anne Fine for middle children. It was published by Egmont under their Jelly Pie (humour) imprint on 5th August 2013, and reissued in February 2018.

Click the logo to order On Planet Fruitcake from