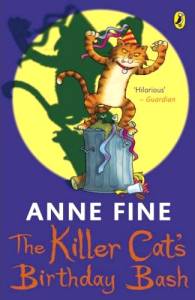 It was my birthday.
How was I supposed to know...
...it wouldn't be the only party around town on that dark and dreary Halloween night?

So things ended up in a bit of a mess. Well, more than a mess, really; a complete disaster. But it was not my fault so don't blame me...

Anne Fine explains how she thought of this riotous outing Tuffy the Killer Cat:
"The idea for The Killer Cat's Birthday Bash came from a walk I took around the nearby churchyard on a winter's night. My dog and I often go round the graveyard. It suits us both, being quiet, properly dark, and usually free from people. (I'm never scared outside in the dark. I can get the creeps inside the house if all the lights go out, but never outside in the open.)

"At one point in the circuit we walk around the church itself, which is floodlit. On that particular evening, Harvey happened to stroll between the floodlight set in the grass and the church front. Across the church wall fell the shadow of the most enormous dog. It was quite startling, as if some giant shadow animal had started stalking us.

"Harvey's quite old and sedate now. He doesn't make the scariest of shadows, however large.

"And just suppose that it was Halloween..."


If you enjoyed The Killer Cat's Birthday Bash, you'll probably like the other 'Killer Cat' books, too.

The Killer Cat's Birthday Bash by Anne Fine is a book for younger children. It was published by Puffin Books on 7th August 2008.