On Tuesday 8 July 2003, Anne Fine officially opened a "Tactile Wall" for the children of Linden Lodge School in Wimbledon, London. She told us what it was all about:

Over the last few years, I've become more and more interested in how difficult it is for blind children to share what the rest of us have so easily in the way of reading. And sometimes, when these children are in your mind, ideas come to you.

An architect I know, Angus Forsyth, had designed a sort of "interesting wall" for the children in his daughter's nursery school who were feeling a bit low, or coming down with something, and taking a rest on a mat in a corner.

I took one look at it and thought, "I know who could do with a very close version of this: Blind and seriously visually-impaired children!" I asked Linden Lodge School what they thought, since all their children have problems with sight. Some can't see at all and others see only poorly. When sight's a problem, what better than a whole load of interesting things to feel? (Which of us hasn't, in childhood, spent hours making our hot water bottle go "flob, flob, flob" over and over, or running our fingertips around any spiral shape we could find, from the middle to the very edge and then back in again?)

So I asked Angus (who worked as an architect but now enjoys designing all sorts of things in wood) to create a "tactile wall" for the children of Linden Lodge School. He did it for only the cost of his materials - (talk about SAINTLY).

Maybe the easiest way to describe it is as a sophisticated version of one of those 'busy boxes' you see hung on the sides of children's cots and playpens.

It's outdoors, for use at playtime, and looks a bit like a stylish bus shelter. Each of the large square panels Angus designed feels different: some are strange, some make you think, some are comforting to touch, some have a compelling pattern your fingers just itch to follow. Some panels do something. You can make a noise on others.

I'm sure everyone in the school will soon have a favourite. Angus and I are curious to see which it will be. 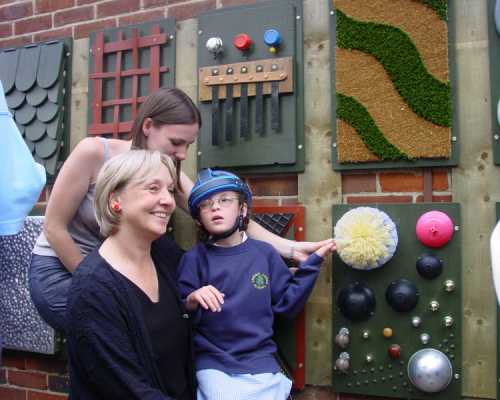 Anne spoke to BBC's In Touch programme on 1 July 2003 about this and other things. If you have Real Player, you can listen to this clip from the BBC's website. In Touch covered the opening and it was featured in their broadcast on Radio 4 on Tuesday 15 July. You can hear the programme again over the Internet by taking the link from the In Touch factsheet for that programme. The feature starts about seven minutes into the programme.