THE ROAD OF BONES 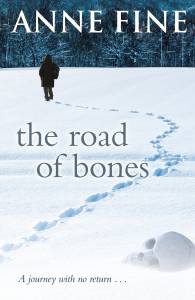 Before I was even seven, I swear I could spell 'The Glorious Revolution'...

'Glorious Lie, more like,' is what Yuri's Grandmother calls it. Everyone believes what they're told and everyone knows who to cheer for, now that the Czar has gone.

But people still vanish sometimes. No one sees anything, or hears anything. And no one ever comes back. Yuri knows this. But he never dreams that he too could be considered an 'enemy of the state' simply for letting drop a few careless words.

Now he's taking his first steps on a road to despair. A road built on the bones of those who dared to oppose.

Set in a totalitarian state, this is a brave and uncompromising novel. In spite of dealing with brutality in society, it is never negative and it will have political resonance for young people. Incredibly well written, the author stands back enough to allow her characters space to reflect on their actions.

What Anne Fine says about The Road of Bones:

It's often said that the it's the book who chooses the writer, not the other way round.

That's certainly true in this case. I was sitting in bed on a warm night in Melbourne, reading Gulag, the magisterial book by Anne Applebaum on the Russian prison camps. She was telling of how, every now and again, two prisoners might persuade a naive third prisoner - preferably a still chubby third prisoner - to join them in an escape. Little did the poor sap realise that his role, through the bleak and all but hopeless trek across hundreds of miles of frozen wastes, was that of a sort of walking larder. Behind his back, the two original plotters might even refer to their future victim as 'the meat'.

Of course it gave me the shudders. But at that very moment, for reasons I still can't analyse, I knew I was going to write The Road of Bones.

"Succeeds brilliantly on three levels: The crushing atmosphere of Stalinist Russia is brilliantly evoked; Yuri is a memorable character who retains his humanity in the face of all that was inhumane; and political ideas are made palpable as Yuri and other characters reflect upon their conditions."

"This is without doubt one of the top novels of the year, by one of the best writers we have. Essential reading..."

"There is nothing small about The Road of Bones. Beneath its cold, white cover, a story of magnitude unfolds... This is a modern novel with a mythical sensibility that grapples with those troubling questions about the atrocities human beings can perpetrate in the name of making the world a better place."

"This ambitious book is a rare achievement... This book is subtle, stimulating and morally complex, but it is also evocative and convincing: we feel keenly the chill of both soulless hegemony and its frozen wastes."

Nicolette Jones, Sunday Times
making The Road of Bones their "Children's book of the week"

"A powerful and moving work and, I think, her best yet."

"...her best yet - a book that has you reading with your mouth open with terror or your eyes filling with tears."

"There are few more influential, or more unfailingly intelligent, authors at work."

"A rather bleak but astonishing book from this remarkable writer."

"The Road of Bones is a pretty dark novel," Anne told Meet the Author. But she added "I hope it's exciting. I've already been accused of quite a few ruined fingernails..."

Click the logo to visit Meet the Author, and watch the video of Anne talking about The Road of Bones.

Or read a transcript of what Anne said.

Anne appeared on BBC Woman's Hour on 26 June, 2006, talking about the diaries of Nina Lugovskaya, a Moscow teenager who lived under Stalin in the 1930's, as well as The Road of Bones. The programme is still available via the BBC's listen again service.

Anne talked about The Road of Bones at the Hay-on-Wye festival.

The US edition of The Road of Bones was published by Farrar, Strauss & Giroux on April 29th 2008.

Order this book in the UK from