FLY IN THE OINTMENT 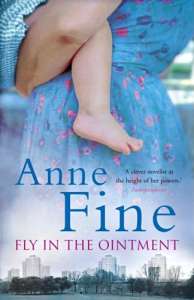 Guilt's in the eye of the beholder. So you tell me what you think you'd have done. You be the judge.

When, like her cold and indifferent husband, Lois' old life vanishes into thin air, she can't help snatching at the opportunity to come alive.

There's only one fly in the ointment: Janie Gay, the feckless and spiteful mother of her wayward son's child. But as Lois takes her second - and redeeming - chance at love, she finds herself on a collision course with a society that claims to support and protect. She lays her plans, and suddenly it seems that all those years of nurturing her own deep-frozen heart may not have been so wasted after all...

In this, her seventh novel for adults, Anne Fine offers a deeply chilling portrayal of what can happen when the remorseless convictions of society clash with the impulse of a determined mother.

Good Housekeeping listed Fly in the Ointment as one of their "Seven Great Reads" for April 2008, and said:
"Never shy of examining the nastier bits of our natures, Fine chillingly tackles the business of bad mothers - and lawless grandmothers."

Fly in the Ointment is a novel that sprang to mind when I realized that there proves to be an added and unconsidered joy in being the mother of daughters. I adored the two of them anyway, but when they started to raise their own families it was such a relief to see that many of the things I considered important about bringing up children were being passed down. I seemed to have so many friends who felt uncomfortable watching their daughters-in-law dumping their grandchildren in front of the television for hours, or who had ended up worrying about those same very small children being in unsuitable daycare, eating poorly, never sharing books, or being disciplined too harshly or not at all.

Then a good friend resigned from the full-time job I always thought she loved, and took a part time appointment three counties away. Pressed, she admitted she'd felt obliged to offer some convincing excuse to her son and daughter-in-law to explain why she happened to be moving to the very same town as them. But in truth it was in order to be closer to the grandchildren about whom she had been fretting. Her plan, it turned out, was to wait a few weeks, then casually offer to care for the children two days a week in her own home. Doing things this way, she hoped her daughter-in-law, (who often appeared hair-triggered to take offence) would sense no veiled criticism about the length of time these two tiny children were currently spending in rather unfeeling daycare.

I started wondering how far I myself would be prepared to go...

All my novels begin with the question 'What if...?' I might not be like Lois, but I can certainly imagine myself going through her thought processes all the way along.

I wanted to make the book entirely credible psychologically, and a page turner. The most powerful drives and feelings are always those within the family. It is a crucible for love and hate. The family's endless refractions, both positive and painful, have always been my own home ground as a writer.

"As wicked and dangerous as ever, Anne Fine is on sparkling form... Deploying both wit and daring, Fine pokes away at the cracks in our moral compass with the sharpest of pens."

"It should be read, ingested, discussed, then read again. It raises matters germane to the lives of pretty much everyone. It is subtle, nuanced, beguiling and often shocking. It will smash and grab your attention right from the start. Book groups take note."

"Fine is a storyteller of brilliance, and this short tragedy is utterly compelling."

"As cool, elegant and blackly funny as Anne Fine gets in a tale of love grandparent style...but what a grandparent!"

Fly in the Ointment, a book for adults by Anne Fine, was first published by Bantam Press on 25th March 2008; it is now available in a variety of editions. Use the links below to order it from

or from your local bookshop, quoting the ISBN provided: