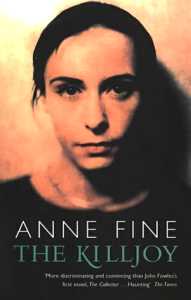 Nobody, not even his former wife Margaret, has ever treated Ian Laidlaw in a natural way. Presented with his hideous facial scars, everyone he meets reliably falls back on cast-iron, distant courtesy to hide pity or disgust or shock. But then Alicia Davie, a careless young student, breaks the rules totally by laughing in his face. Alicia goes on to infiltrate the hidden man, exposing the obsessive, destructive passions that lurk beneath his primly cordial manner, never realizing that she is playing with fire...

The Killjoy won the Scottish Arts Council Book Award for 1986, and was recommended for the David Higham Prize for Fiction.

Reflecting on the new, Kindle edition of The Killjoy, Anne said:

When my daughter was four, we went off to America for seven years because of my husband's job. By the time we came back, our stable, almost unchanging babysitting cooperative of other families with young children had been turned upside down. Divorces, remarriages, chaos. I became fascinated by the nature of passion - how people could suddenly choose to risk all the stability they'd created around themselves and those they loved, simply in order to feel fully emotionally alive again. Up until then, I'd been perfectly happy writing novels for older children, but this was clearly a subject to be explored at an adult level.

The book become darker and darker in the writing. I didn't realise how dark until the first review came in: "a horror story which rings absolutely true". But that is passion for you. It's dangerous in every way.

"Definitely not one for the faint-hearted. It's compellingly written, sinister... and very, very fine"

"A novel with an adder in the prose... observant and impressive"

"A wonderful and original piece of work - impeccable from beginning to end ... a horror story which rings absolutely true"

The Killjoy, a novel for adults by Anne Fine, was first published in 1986. It has been issued several times in paperback, most recently by Black Swan on 28th February 2011: order it now from Amazon or from any bookshop or library, quoting the ISBN 978-0-552-77764-3.

The Killjoy has been translated into French and German.