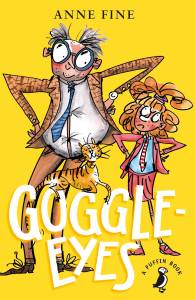 Helen's in a bad mood. She won't speak to anyone. She has run off to the cloakroom in tears.

So why does Mrs Lupey send Kitty to sit with her? Liz is Helly's best friend.

But Kitty Killin is not just a brilliant story-teller, she's also the World's Great Expert when it comes to mothers having new and unwelcome boyfriends. So it's no surprise that she's the one chosen to sort out Helly, who's gone into meltdown. Kitty decides to share her story about old Goggle-eyes - possibly one of the worst episodes in her life...

Goggle-Eyes was first published in 1989 - more than 30 years ago! Here's the message Anne Fine wrote for its birthday:

Writing a book seems to take FOREVER. Alone at your desk, you ask yourself almost every day, "Is this book worth it?"

Not a judgement that's easy to make at the time.

Look back years later, and the answer may be a good deal clearer. (Not always! Herman Melville's own lifetime saw pitifully few readers of his great novel Moby-Dick.) But June is the thirty year anniversary of Goggle-Eyes, and not only is the novel still in print, but it's being reissued with a invigorating new cover by the lively Mark Beech, along with an afterword.

What's changed in all those years since I first wrote this story of the entrenched disagreement between lippy young political activist, Kitty, and her new conservative stepfather figure, Gerald Faulkner, whom she calls Goggle-Eyes (based on my dad)? Mostly, to my astonishment, the tactics of the police. And not much else. Apart from that, the issues in the book are easily mirrored by those for young people in today's world.

Goggle-Eyes won both the Carnegie Medal and the Guardian Children's Book Award, and over the years I've been told by so many readers that it's the book of mine they've loved the most. Those from split families have a particular affection for the story, and maybe that's because there are no villains in it. Everyone's trying their best. The problem is that everyone (except for Kitty's easy-going young sister, Jude) is coming at life from a different perspective. We can all learn from that.

The Russians have some extremely strange proverbs. "The further into the woods you go, the more trees you will find." At first, they sound unhinged. But you read Goggle-Eyes, and you will realise there is a depth to them you never saw before.

Winner of the Carnegie Medal for 1989

Winner of the Guardian Children's Fiction Award in 1990

Goggle-Eyes was published in the USA with the title My War With Goggle-Eyes.

"Goggle-Eyes is a winner: witty, sensitive and warm-hearted ... a lovely book"

Goggle-Eyes, a book for older children.