UP ON CLOUD NINE 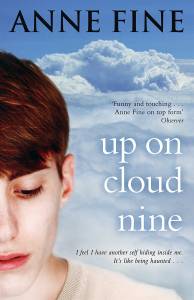 How stupid do you have to be to fall out of a top floor window?

Or was Stolly trying something else - up on cloud nine, even then?

Stolly has always been so alive, so inspiring, taking risks, hiding nothing, notorious for being the school's most imaginative liar (or fantasist, as he calls it). But now he's lying in a hospital bed and Ian, his best friend who's as close as a brother, is watching, waiting and remembering...

A characteristically funny, moving, life-affirming novel about a most remarkable character and the truly inspirational effect he has on everyone he meets.

Up on Cloud Nine was Highly Commended for the Carnegie Medal 2002.
The US edition was an ALA Notable Children's Book, Editor's Choice

Over on the Meet the Author website, Anne introduces the book in a short video clip.

"Stolly is different from other boys. People call him eccentric, if they're feeling positive. Mad, if they're not. His closest friend, Ian, who is as steady as Stolly is strange, is the narrator of this funny, touching novel which shows Anne Fine on top form. Stolly is one of the most endearing and original characters to have appeared in children's literature for a long time.

"The story opens with Ian and his mother watching over Stolly in an intensive care ward. Stolly's own parents are well-off and neglectful, so Stolly has spent most of his time at Ian's house. He has fallen from a window, but the question is did he jump, or was he just trying some strange Stolly experiment?

"As Ian waits, the story of his relationship with Stolly unfolds. Stolly can be more purely happy than anyone, but there was the time when he thought he had a little devil sitting on his shoulder. And he is a fantasist of the finest order. But Stolly's ultimate aim is 'onwards and upwards' and although the ending isn't explicitly tied up, the book is satisfyingly uplifting."

"... Stolly was always so alive. But now he is lying motionless in a hospital bed after a fall - which doesn't look like an accident - from a top-floor window ... This latest novel from the Children's Laureate may be inspired by the phenomenon of teenage suicide, but there is nothing grim or mawkish about it: a wonderfully funny and perceptive glimpse of the inner lives of boys."

"And as always with Anne Fine, the jokes are excellent. However hard-pressed her teacher and parent characters may be, they still have time for the type of black humour that can light up an otherwise dull day."

(Nicholas Tucker is co-author, with Nikki Gamble, of Family Fictions, which has a chapter looking at all of Anne's children's books. Written in a lively style, it offers plenty to interest young as well as older fans of Anne's writing.)

"Up on Cloud Nine by Anne Fine is a real treat for the many fans of the Children's laureate: a highly enjoyable novel that is characteristically funny, clever and moving... The stories and characters that emerge, especially Stolly's negligent parents, are sharply observed and hilarious, but at the same time deeply affecting."

Jill Slotover, in the Financial Times

"In this subtle and entertaining novel, the children's laureate Anne Fine has created a boy who breaks through the conventions of what boys are supposed to be like. Stolly skives off football and talks about his feelings. He revels in his imagination and does not care what people think of him. He is not only the school eccentric, but also the boy to whom others look to express what they themselves dare not say.

"One day he falls, or jumps, out of a window. As he lies unconscious in hospital, his closest friend, Ian, writes his memories of Stolly. He does this partly to prove to his friend when he wakes (which he does, with broken bones but no psychological damage) the value of his own existence. Ian demonstrates, like Clarence the angel in the film It's a Wonderful Life, the worth of a person who doubts himself. Ian's account is comic and engaging - and sophisticatedly satirical in its description of Stolly's parents, especially his fashion-photographer mother, a character straight out of Ab Fab, who sees life as a series of pretentious opportunities to dress the part. His father is a barrister obsessed with high-profile cases; neither parent has much time for their son, who virtually moves in with Ian's family.

"Somewhere behind the humorous anecdotes of Stolly's wackiness, dreaminess and morbidity there is some serious thought about family life and also about sensitive creative boys who go against macho stereotypes. Ian, although outwardly more conformist than his friend, is also sensitive and thoughtful; between them, these two characters will make children of both sexes accept unusualness and difference, both in themselves and in others. This book will move them, and it will make them laugh."

"New work by the current Children's Laureate is also bound to command attention. In Up on Cloud Nine, Anne Fine's latest novel for older readers, Stolly, the eccentric hazard-prone hero, spends the whole book semi-comatose. But he is magnificently evoked for us through a series of recollections and bedside musings of his best friend, Ian."

Up on Cloud Nine is a book for older children. It was first published in hardback on 1 January 2002 and in paperback on 3 February 2003.

Buy Up on Cloud Nine from