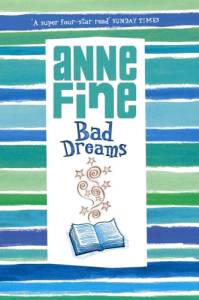 I couldn't have felt more sorry for her.

After all, I read more than my fair share of books that made me keep the light on all night long. And lots of books that made me sad, or anxious, till things work out right. But I don't end up in a state like her, halfway to fainting because of three or four grisly pages, and not even able to look at the cover of that book again without wanting to shudder.

'A gift,' her mother called it. But, the more Imogen told me about it, the more I thought that that was totally the wrong word.

Mel is the class bookworm. She prefers books to people and doesn't want to be a first-week minder for new girl, Imogen. But there's something very strange about Imogen and, as Mel slowly uncovers the truth, she begins to realize that stories can happen in real life, too. And only she can stop Imogen's private horror story -- stop the bad dreams...

A gripping tale of real life and story lives - and of the importance of being free to be yourself.

Confessions of a bookworm

This is what Anne Fine says about Bad Dreams:

One of the questions children often ask authors is, "Do you put yourself in your books?" I confess that, in Bad Dreams, I have written the closest account of myself as a child. I was like Mel. I thought the same way she does. I had the same passion for reading and the same habit of trying to get to all the good books first. I hoarded books and comics everywhere so there would always, always be something to read.
I'm not sure how people turn into bookworms. I should think it's probably partly genetic - like happening to have blue eyes or brown hair - and partly being lucky enough to meet the right books at the right time. You're blessed if your parents and teachers know the value of libraries and second-hand bookshops, and make the effort to see you have a constant supply of fresh things to read.
But most of it comes from inside you. There are those who secretly believe (as Mel tries to explain to her teacher) that books are in some ways far more real than real life itself. They can certainly bring as much pleasure. (The American humourist, Logan Pearsall Smith, is famous for once declaring, "People say Life is the thing, but I much prefer reading.")
I learned to read when I was very young indeed. When I was three, my mother had triplet babies and, to make things a little easier, I was sent straight to the next door infant school. Nobody explained that I was really only there to be babysat, and didn't need to try to keep up with the rest. So by the age of four I was a very good reader. Then, when the primary school insisted I wouldn't be old enough to join them for another year, my lovely infant school headteacher gave me the run of the glass-fronted bookshelf in her office. I still remember tapping nervously on the door, being beckoned inside, and sitting quietly on her carpet choosing my next few books, then trying to stop the glass doors juddering horribly along their wooden runnels when it was time to slide them closed again.
A whole school year, at seven, with nothing to do but sit and read. Some people would have hated it. I was in seventh heaven. I've always preferred reading. When I was young, my mother was forever trying to shoo me out of the house. "It's such a nice day. Why don't you go outside?"
I always tried to wriggle out of it, preferring to stay inside and read about someone else in a story who had done just that.
And find out what happened to them...

"Readers will not be putting this one down until the last page."

"So positive about how reading enriches children's lives that it makes you want to punch the air."

"Fine once again shows that she has an ear for dialogue and the world of children in a story that is both sympathetic and frightening in turn. Her treatment of magic interacting with the mundane everyday world is an interesting touch in this page-turning story."

"This is a book driven by people's relationships with books, yet it's written colloquially enough that unsophisticated readers will also find it accessible."

"A unique and comically twisted tone...that should appeal both to fans of school stories and magic." 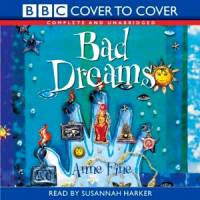 Bad Dreams is a book for children in the middle age range; it was first published in 2000, and reissued in a revised edition 2006.