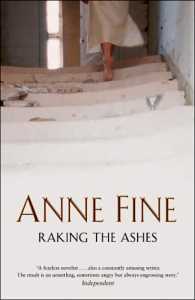 Lovers, colleagues, family — Tilly has always been brilliant at pushing people in and out of her life exactly as it suits her. Then along comes Geoffrey, gentle, compassionate, generous to a fault, with his miserable little children and his manipulative ex-wife.

Tilly's own expertise in the arts of deception and avoidance should be enough to make sure she's always one step ahead of Geoffrey's crumbling family. But time and again she finds herself staying, brought down by their cowardly backsliding and their barefaced lies.

How has she managed to stay so long in a relationship she knows perfectly well has to be doomed?

More importantly, how can Tilly plan her permanent escape?

Anne Fine's sixth novel is a coruscating comedy written with her trademark wit, insight and grimly dark humour about the ties that bind more savagely than any other — those of families.

Anne was interviewed on Woman's Hour by Jenni Murray, who said that the lead character, Tilly, was "one of the most extraordinary female characters in literature", adding "It's a very funny book." You can hear the whole interview via this page on the BBC website.

"...One of Fine's blackest comedies...powered by fury, the kind of hilarious, raging honesty inspired when people get too close..."

The Independent on Sunday

"So savage and sharp in its insights that it cuts, this is a brilliantly compulsive, forensic dissection of a relationship built on ironies and evasions."

"And yet there is something terrifyingly recognisable in each of the characters that will have readers looking deep inside their souls."


"We're all fascinated by the games people play within their relationships, and in Raking the Ashes, the sixth novel from the acutely perceptive Anne Fine, the power play and plotting are excruciatingly recognisable. ....Written with humour and barbed wit."


"It's cruel and very funny: a rare treat from the excellent Anne Fine."


"a sharp, playful and economical book"


"The superlative Fine's observations on family life get sharper with each book."

Order Raking the Ashes from