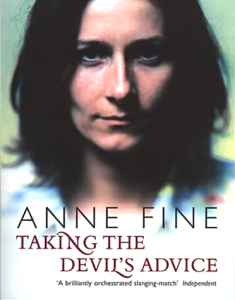 Spending the summer with his ex-wife, his children, his ex-gardener (and ex-wife's new husband) was never going to be a good idea.

Perhaps Oliver should have expected the autobiography he was writing to be constantly sabotaged? Perhaps he should have guessed that he'd have scorn and derision poured upon him? But then Oliver was a philosopher, always happier with abstraction than reality, and the realities of his life have never been simple. Now they're about to come crashing down around him in the most unexpected and hilarious of ways.

Taking the Devil's advice was shortlisted for the Glasgow Herald People's Prize in 1991 and (translated into French as Les Confessions de Victoria Plum) for the Grand Prix des Lectrices d'Elle in 1993.

Reflecting on the new, Kindle edition of Taking the Devil's Advice, Anne said:

Seven years in America because of my husband's job just about finished me. I was horribly homesick, and writers are so often happier on their home ground. But he loved living in the States. We tried to keep the marriage together, but in the end it fell apart. (I have a theory that the wedding vows should add another proviso to 'for better for worse, for richer for poorer, in sickness and in health' and that should be 'at home and abroad'. That's harder than anyone admits.)

After we split up I wrote Taking the Devil's Advice. I see it now as a comedic howl of pain against the horrific difficulties of separating where there is a basic incompatibility of choices in life, but no true dislike or hate to spur the parting or make it easier. It's been called the funniest book about divorce ever written and I am proud of that. The plot's pure fiction, but the psychology is as accurate as I can make it, and I'm not surprised that it is many of my adult readers' favourite. It's certainly mine.

"Shot through with wit, and full of effervescence and good humour"

"It is said to take two to make a quarrel but the casus belli for Constance after sixteen years of marriage is her philosopher husband Oliver's serene unawareness of ever having given grounds for one... clever and entertaining... a direly witty achievement"

Taking the Devil's Advice is available:

It has also been translated into French and German.